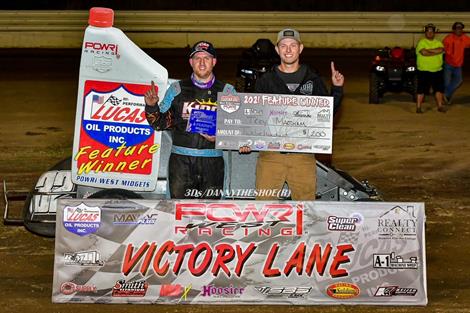 Tulsa, Oklahoma (September 24, 2021) The Newcastle, Oklahoma native Trey Marcham made a late race charge to pass Kyle Jones and claim his second win of the Lucas Oil POWRi West Midget League season. At the drop of the green flag, Marcham, who started seventh for the main event, methodically worked his way through traffic as Jones took the early lead away from Emilio Hoover. Jones paced the field through multiple cautions while Hoover, Andrew Felker, and Hank Davis battled for positions behind him. When racing resumed, Felker and Shannon McQueen traded passes as Marcham continued to work his way forward.