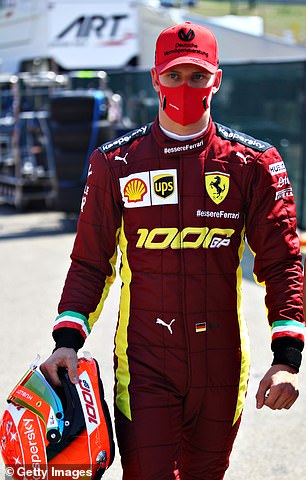 The most poisoned chalice in sport? Mick Schumacher has the unenviable task of following in his father’s footsteps… but with a promotion to F1 on the horizon, has he REALLY got what it takes to succeed?

Following the footsteps of a father in sport is often more of a curse than it is a blessing. And in sporting father-son terms, there is no shadow greater and no expectation bigger than that on Michael Schumacher’s son, Mick. Mick Schumacher (left) is determined to follow in the footsteps of father Michael (right) in F1. Schumacher Jnr drove his dad’s old Ferrari F2004 before the Tuscan Grand Prix last weekend. Mick Schumacher is emerging as a real star and currently leads the Formula 2 championship. Schumacher (left) is in line for a promotion to Formula One next season with seats available. Michael Schumacher suffered a horrific skiing accident on the French Alps in December 2013. The Schumacher name is perhaps the most famous in motorsport history, certainly no peer of Mick will be expected to succeed as fast as he will be. If it was ever in doubt, Mick’s rise is proof it really is like father, like son.