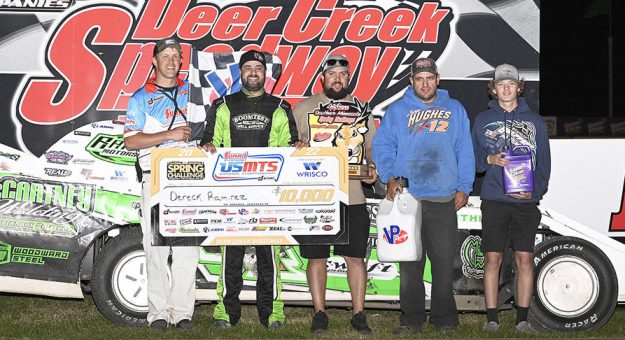 SPRING VALLEY, Minn. — Dereck Ramirez notched his first win of the season with the Summit USMTS National Championship on Saturday night by leading every lap of the 19th Annual Southern MN Spring Challenge at Deer Creek Speedway. For the defending USMTS national champ, it was an emotional post-race celebration following his first win since the passing of his father Leon Ramirez. Shortly thereafter, the USMTS announced that this year’s champ will earn the richest paycheck in series history as $100,000 will be awarded to the Summit USMTS National Championship points champion. Ramirez led every lap of his heat race, earned the Sybesma Graphics Pole Award and then led all 40 laps of the main event — all to pocket $10,000 and score his 20th career USMTS triumph.