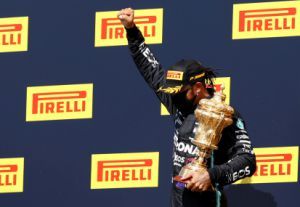 What is Lewis Hamilton’s net worth, how many F1 titles has he won as superstar set to be KNIGHTEDThe racing star won his first F1 Grand Prix in 2007

LEWIS Hamilton is Britain’s most successful Formula One driver of all time. Just last week he made history by tying Michael Schumacher’s record for most F1 world titles won with SEVEN. Hamilton has been incredibly strong in his support for the Black Lives Matter movement and has kneeled numerous times before races this season. Hamilton’s Formula One debut came in 2007 and that season he won four races and secured six poles. Hamilton has been world champion a joint-record seven times – in 2008, 2014, 2015, 2017, 2018, 2019 and 2020. In 2017 he won the Mexican Grand Prix and defended his title again in 2018, before doing the same last year. In 2014, Lewis was named the most marketable sportsman in the world.