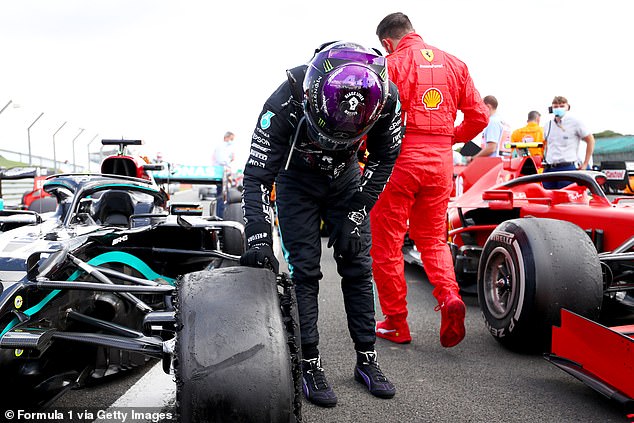 ‘We don’t want to push these… they might explode!’: Lewis Hamilton says Mercedes must change their strategy to avoid repeat of of final-lap tyre drama at Silverstone for 70th Anniversary Grand Prix

Lewis Hamilton fears his tyres could explode again on Sunday, a week after he finished a dramatic British Grand Prix on three wheels. Lewis Hamilton is not feeling confident about his Pirelli tyres for Sunday’s 70th Anniversary GP. Hulkenberg was nine-tenths back from Bottas in a Mercedes so dominant that only a freak occurrence, such as an exploding tyre, can conceivably provide an alternative winning team in this landmark race. Racing Point has been dubbed the ‘Pink Mercedes’, so similar is it to the world champion’s car of last year. Four teams — McLaren, Ferrari, Renault and Williams — have indicated they will appeal against both the leniency of the punishment and the fact Racing Point can continue to race a car deemed by the stewards to have been created illicitly. Racing Point have also indicated they will challenge the ruling, believing they have done nothing wrong.