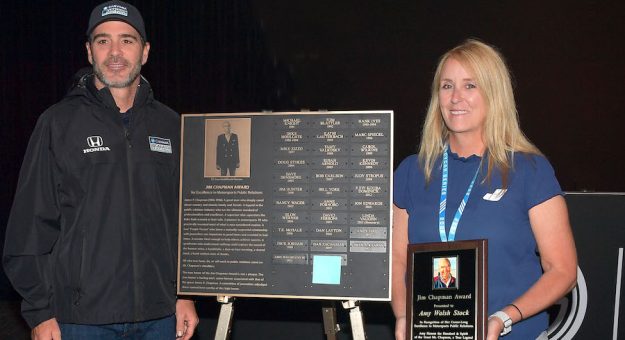 INDIANAPOLIS — Publicists Amy Walsh-Stock and Steve H. Shunck Friday were announced as winners of the 2022 Jim Chapman Award for excellence in motorsports public relations. The Chapman Award is considered by many in the industry as the highest honor in racing public relations. The award is determined by a vote of national media members and is authorized by the Chapman family. Walsh-Stock is the communications director for seven-time NASCAR Cup series champion Jimmie Johnson, scheduled to make his first start in the “Greatest Spectacle in Racing.” Shunck represents the Borg-Warner Corp., presenter of the world-famous trophy that goes to the race winner, as well as the traditional wreath placed over that driver’s shoulders. Walsh-Stock began a career with NASCAR drivers, teams and sponsors in 2000. Walsh-Stock then continued with Johnson to Chip Ganassi Racing when he switched to select NTT IndyCar Series races in 2021, also doing media for champion driver Alex Palou. Established in 1991 by media and publicists within the CART series, the Chapman Award originally focused on achievement in CART.