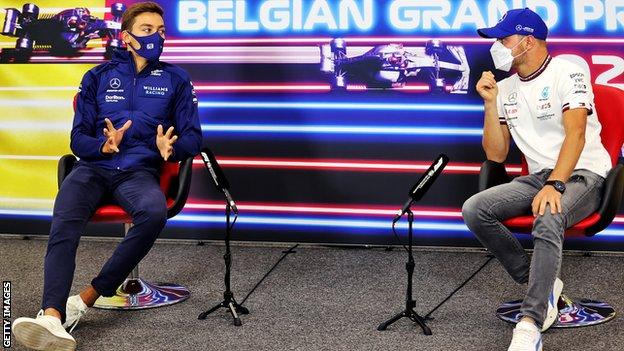 Bottas said: “I am proud of what I achieved at Mercedes and I am fully focused on finishing the job as we fight for another world championship. Bottas joins Alfa Romeo as an effective replacement for Kimi Raikkonen, who is retiring from Formula 1 at the end of the season. Alfa Romeo said Bottas had signed a “multi-year deal”, which is likely to be for at least two or three years. Bottas said he believed that the Alfa Romeo/Sauber facilities in Hinwil in Switzerland had “clear potential” and he hoped the new technical regulations being introduced by F1 in 2022 would give “the team a chance to make a leap in performance”. Alfa Romeo are ninth in the constructors’ championship after 13 races this season. “I’m grateful for the trust the team has put in me,” Bottas said, “and I cannot wait to repay their faith: I’m as hungry as ever to race for results and, when the time comes, for wins.”. Alfa Romeo team principal Frederic Vasseur, who ran Bottas in junior categories, said: “With him, we bring to Hinwil a strong team player with experience at the sharp end of the grid. Alfa Romeo have made no announcement on a second driver.