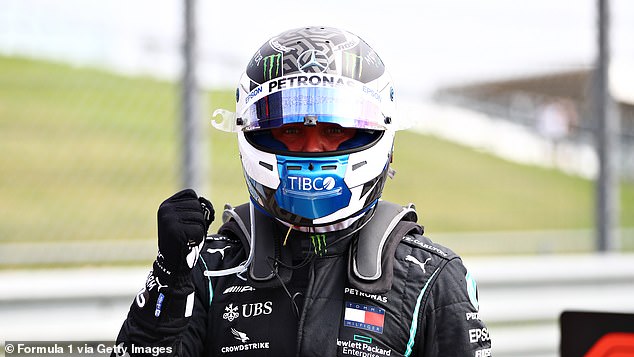 Valtteri Bottas took pole position for the 70th Anniversary Grand Prix by springing a surprisingly fast final lap to pip Lewis Hamilton by six-hundredths of a second. Valtteri Bottas has qualified on pole position for the 70th Anniversary Grand Prix. Valtteri Bottas has taken pole for tomorrow’s race! Hulkenberg takes third while Verstappen has to settle for fourth. Hamilton is on his way and looking to clinch another pole at Silverstone… Hamilton is out on his flying lap and has posted purple in the first two sectors on the softs. Hulkenberg split the two Mercedes just now but Bottas and Hamilton will surely step up another level to secure a 1-2 place on the grid – but in what order?. Wow, Hulkenberg and Gasly have both posted rapid times, as the Racing Point goes second ABOVE Lewis Hamilton who places in third. Mercedes have sent Bottas and Hamilton out on the soft tyres for the final two minutes of the session. Meanwhile, Max Verstappen has gone out on the hard compound tyre, a bold move from Red Bull. Meanwhile, Bottas posts a time of 1:26.738, just 0.080 seconds quicker than Hamilton. Meanwhile, Vettel’s woes continue as he posts the 13th-fastest time. Hamilton is coming in now and he goes top with a time of 1:27.231, and Bottas follows up with a 1:27.175 but Verstappen goes faster by just 0.021 seconds. Hulkenberg follows up with a time of 1:27.279, over a second faster than  those two drivers.