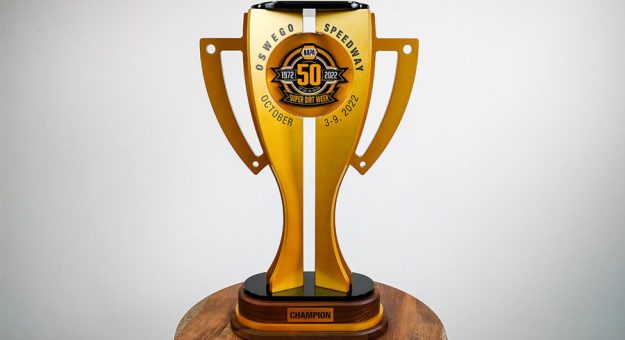 OSWEGO, N.Y. — Fifty years of NAPA Super DIRT Week history will be bestowed upon the Billy Whittaker Cars 200 champion in October. The stories and legacy of the event will be encapsulated in a more than two-foot-tall golden cup like no other. The black oval at the base is the exact shape of the Syracuse “Moody Mile,” the treasured track that birthed Super DIRT Week and hosted the event from 1972 to 2015 before being torn down. At the top of the trophy, the smaller black oval is the exact shape of the “Steel Palace” Oswego Speedway, which became the new home for Super DIRT Week in 2016 and will host the historic 50th running of the event this year, Oct. 3-9.