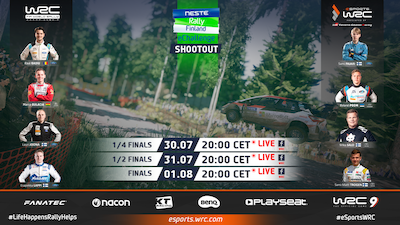 Sami-Matti Trogen has claimed victory in the final of the Neste Rally Finland eChallenge Shootout Final over fellow Finn Sami Pajari, but by a margin closer than many would have predicted. But, with tens of thousands of fans watching from home on WRC’s Facebook and YouTube channels, it was advantage Pajari early on, winning the opening Harju stage by more than two seconds. Midway through the second and deciding stage, Ouninpohja, it appeared that Pajari’s two-second advantage would be enough to take him to victory. However, disaster would strike midway through the stage when the 2019 Flying Finn recipient put his Ford Fiesta WRC on its roof, leaving the door open for Trogen to claim a four-second victory.