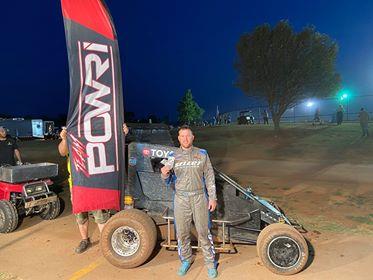 Trey Marcham Makes it Two on the Year

(08/22/2020) Trey Marcham out of Oklahoma City, OK. adds another clean sweep to his belt for the 2020 race season. Making Saturday night, August 22 his second clean sweep, meaning winning the heat race, being high point man, and taking himself to victory lane to finish off the night. Marcham started the 25- lap main event starting in the second position, the outside of the first row. From the green flag to checkered, Trey Marcham led the way and found himself in victory lane once again at I-44 Riverside Speedway in Oklahoma City, OK. 44S home in the fourth position, and the lady driver Shannon McQueen got herself a fifth-place finish. POWRi Lucas Oil West Midget League Feature Winner: Trey Marcham. POWRi Lucas Oil West Midget League Results (25 laps): 1.