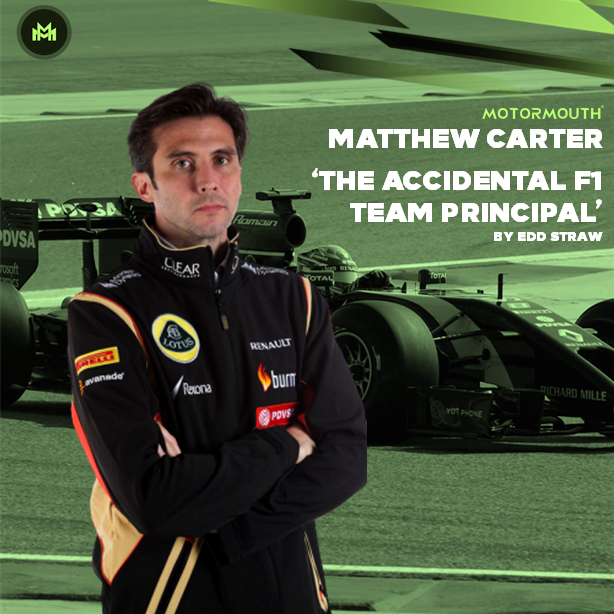 Formula 1 team principals are a rare breed. For most, the job is the culmination of years of toil in paddock, but just six years ago the first grand prix attended by one new team principal was his first grand prix full stop. The 2014 Australian Grand Prix was the start of Matthew Carter’s eventful stint in charge of the Enstone-based Lotus team (now Renault), as he explains in the latest edition of The MotorMouth Podcast.

Carter was working for investment company BridgeHouse Capital when it bought a stake in Lotus in 2012. Late in 2013, he was sent in to evaluate the team and formulate a plan of action, which was first step in his rapid ascent to team principal.

“I prepared my report to say this is what you should do, which included reducing the staff from 600 to 500,” says Carter. “I presented it and they said ‘we like the idea of this, we’d like you to take over as CEO’. I initially said no because I enjoyed working for BridgeHouse and never worked for the companies themselves, I was a consultant dipping in and out. They said ‘this is a bigger deal, so we want you there full time’.”

Having been persuaded that you don’t turn down becoming CEO not just of a Formula 1 team, but one that had won a race in both 2012 and ’13 with Kimi Raikkonen, the plan was for Carter, who had no previous interest in motorsport, to work hand-in-glove with team principal Eric Boullier. This was quickly derailed.

“We’re probably 10 days into this by now and Eric comes into my office and says that he’s accepted a job at McLaren,” says Carter. “I picked up the phone to the two owners and said we’ve got a slight problem – Eric’s left.

“They sent this list of replacements, it was the usual suspects and the wages they were requiring were astronomical. I had literally just come out of a meeting with a guy who was paid £25k a year and was having to lay him off so I rang back the owners and said ‘this doesn’t sit well with me’. They said you need to deal with it, so I called the senior management.

“Alan Permane, who is still at Renault, said ‘I’ve pretty much got us covered at the races from a sporting side…we need someone there who can deal with the media, who can deal with the sponsors and more important than anything else is available to go with the stupid meetings that Bernie [Ecclestone] calls during the race weekend’. So they pointed at me and said you can do it.”

Suddenly, Carter was front-of-house for a team heading into a challenging 2014 season. This was the first year of the 1.6-litre turbo hybrid engines and the Renault power unit was not in good shape. Raikkonen was gone after a settlement that cost him millions, as Carter explains on the podcast, and Pastor Maldonado with his valuable PDVSA sponsorship joined to partner Romain Grosjean. Carter faced a vertical learning curve as the Lotus-Renault E22 rarely scored points despite its famous ‘twin-tusk’ two-pronged nose.

“It was sold to me in our confidential meetings as genius, this was going to be our double diffuser, this was going to take us forward,” says Carter. “And when we got to the first test and nobody else had it, honestly the guys in the technical department were like ‘yes, we need to really drive forward at the start of the season before everyone else picks up on it’.”

Carter recalls how he was caught out by certain esoteric peculiarities of F1 that first weekend. He was even asked to make the final call to retire Grosjean’s car to save mileage, which he bluffed his way through by falling into line with Permane’s recommendation. After this experience, he decided to throw himself into learning everything about F1.

“I spent the whole flight back and probably the next two or three weeks just immersing myself in F1, everything I could,” says Carter. “I went to every technical meeting to the extent that, a year-and-a-half later, I was fairly knowledgeable on everything and could make reasonable calls strategically. But that first race was scary.”

After a tough start, Carter won over his fellow team principals and got Lotus heading in the right direction. He explains the team went from losing £64million in 2013 to breaking even in 2015 before being sold to Renault.

But during the six months it took to do the Renault deal, funds were tight and Carter had to choose between paying for Pirelli tyres or team hospitality at the 2015 Hungarian Grand Prix. He went for the tyres.

Just one race later, he celebrated his sole podium finish as a team principal but even that was overshadowed by the team’s cash struggles.

In 2015, Lotus was a consistent points scorer, partly thanks to Carter landing Mercedes engines thanks to Lotus’s five-year Renault supply contract not having been formally signed – another revealing story he tells in the podcast. It’s Grosjean’s Spa third place that Carter selects as his high point.

“My highlight was Spa 2015, Romain got a podium in a fairly undramatic race,” says Carter. “Apart from [Sebastian] Vettel’s tyre exploded on the penultimate lap, it was a fairly normal dry spa and we got a podium on a shoestring budget with bailiffs in the garage.

“There’s a rule in Belgium that if you can convince a judge that you’ve got a genuine debut owed, then you can seize goods. I had signed a deal with Charles Pic to be our third driver at the start of 2014 and he paid a chunk of money to have 10 FP1 sessions.

“So I told the drivers this and they went apoplectic. Pastor said you can’t it’s in my contract, Romain said we’re going to compromise the setup of the car if I don’t do the FP1s – but I’d taken this money from Charles. As the season progressed, things got worse and worse so I didn’t give Charles all 10 that he paid for.

“Charles is from a very wealthy family and they seized on the Spa/Belgium ruling and that weekend we had bailiffs in the garage. The third place trophy sat in the garage for about a week until we solved our issues with Charles.”

Carter moved on once Renault took over the team and is now based in Montreal. He was even set to take over the running of the Canadian Grand Prix at the behest of Bernie Ecclestone, who he speaks highly of, before Liberty Media’s takeover of Formula 1 torpedoed it.

For someone who had no prior interest in F1, the story of his two-and-a-half years at the helm at Enstone is a remarkable one.

Thanks to Edd for running with this 👍