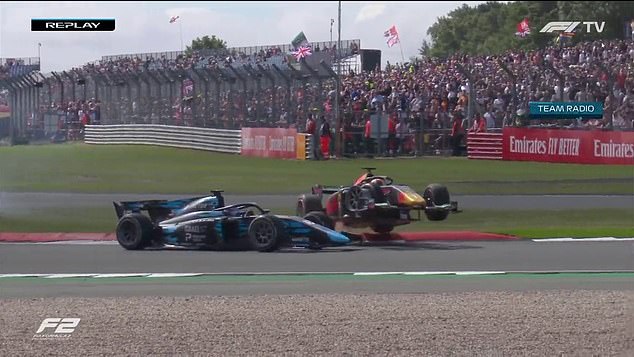 ‘That is a life saved’: Halo protects F2 driver Roy Nissany after Dennis Hauger is launched into the air over sausage kerb before landing ON TOP of him in horror crash at Silverstone

Roy Nissany had a lucky escape when his halo saved him from death during the F2 feature race at Silverstone ahead of the British Grand Prix. Hauger was forced off the track and hit the inside sausage kerb, which launched him into the air before he landed on top of Nissany, who was coming around the bend. If it wasn’t for the halo, the protective curved bar which sits above drivers’ heads, the crash would surely have been fatal. As the horrifying replays were shown, one commentator said: ‘That is a life saved unequivocally and I’m going to say it, I say it a lot on social media, sausage kerbs launch cars into the air – that is the most frightening accident you will see. In 2016, Hamilton described the halo as ‘the worst looking mod in F1 history’, but it would go on to save his life.