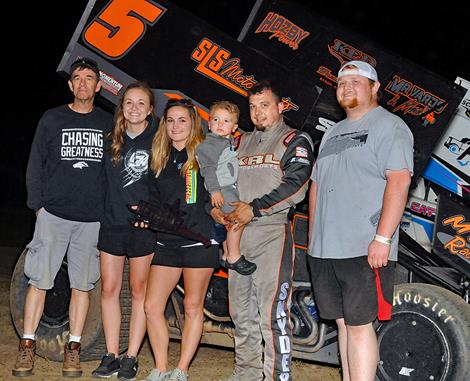 BETHANY, Missouri (June 7, 2021) – The POWRi Drive to Zero United Rebel Sprint Series Presented by Mel Hambelton Ford Racing debuted at yet another Missouri facility on Saturday. A complete restart saw Houseman taking off with the early lead, followed by Dye and Snyder. Kyler Johnson moved up to challenge Williams for third while Snyder began stretching the lead. Williams moved into second on the restart, and soon took over the lead while Johnson advanced to third. Williams stretched the lead across the field, but lap traffic soon became a factor allowing Snyder and Johnson to close in. Snyder advanced to the lead, but not without pressure from Williams and Johnson. Kyler Johnson and Stu Snyder captured heat race victories on Saturday night at Bethany Speedway. Heat One (8 laps): 1) Kyler Johnson, 2) Mike Houseman, Jr., 3) Jacob Dye, 4) Kevin Dye, 5) Ty Williams, 6) Kevin Frisbie, 7) Lindrick Willis, 8) Camdin Couch.