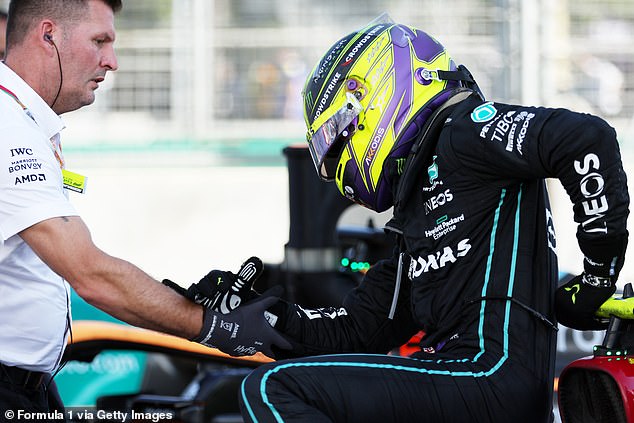 ‘Stop acting like a panto dame!’: F1 grandee John Watson says Lewis Hamilton’s back pain is just a sign that age is catching up with him after Mercedes driver struggled to exit car at Azerbaijan GP

In danger of being a ‘pantomime dame’, as Formula One grandee John Watson suggested last night of Lewis Hamilton, or a victim of seriously incapacitating injuries? There’s no time like the present to pull together, and we will. As Hamilton’s team-mate George Russell said: ‘When you are travelling on the straight, and you are smashing up and down on the ground, you wouldn’t choose to have it that way. While Hamilton laboured with his bad back, Russell moved freely afterwards and was even spotted running through the paddock. Watson, who won the 1981 British Grand Prix during a stellar career, had sympathy with Hamilton’s plight, but added in an interview with Sportsmail: ‘Lewis needs to be careful not to act like a pantomime dame. George looked pretty fresh afterwards and finished third to Lewis’s fourth.