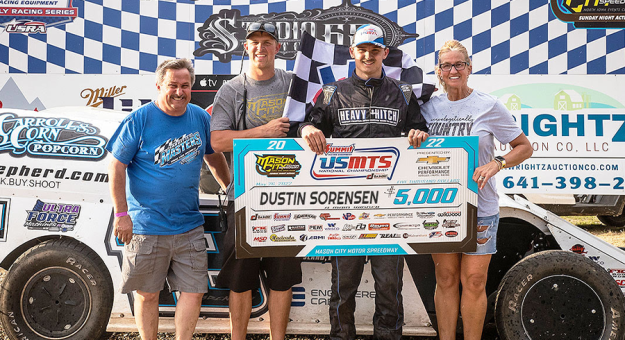 Sorensen Triples Up In USMTS

MASON CITY, Iowa —The four-night Memorial Day Weekend for the Summit USMTS National Championship presented by RacinDirt wrapped up Monday at the Mason City Motor Speedway with points leader Dustin Sorensen dominating the 8th Annual Double Down Showdown.The win, worth $5,000, was the third of the 2022 campaign for the 21-year-old top gun from Rochester, Minn., and ninth of his short career. That moved him into a tie with Brad Waits for 23rd on the all-time USMTS wins list.After earning the pole, Sorensen set sail and let his followers battle back and forth for second-place money. A pair of early cautions and some late-race traffic issues allowed defending USMTS National Champion Dereck Ramirez to narrow the gap, but once in the clear Sorensen pulled away again to an eight-car-length victory.Ramirez, who started ninth on the 23-car grid, settled for second with Zack VanderBeek, Cayden Carter and Tanner Mullens following him to the checkered flag.Ramirez and Mullens are both two-time winners at the North Iowa Fairgrounds Action Track. With his effort, Sorensen joined Hughes, Sanders, Phillips and Lucas Schott with one win apiece.