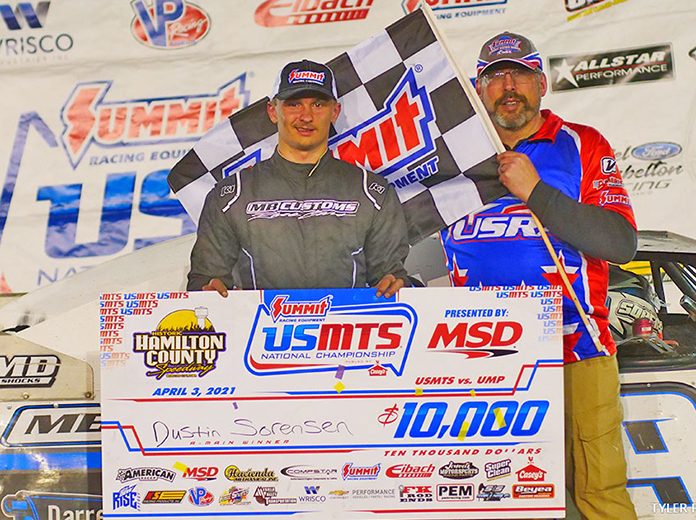 WEBSTER CITY, Iowa — Dustin Sorensen made the most of his opportunities Saturday night during the inaugural USMTS Spring Challenge powered by MSD at the Karl Chevrolet Hamilton County Speedway to score a $10,000 payday. Duvall encountered heavy lapped traffic on lap 15 which allowed Hughes to narrow the advantage to less than two seconds by lap 20. Three laps later, Hughes was side by side with his fellow Oklahoman but Duvall remained ahead by a nose when they reached the start-finish line to complete the 23rd lap. Jake O’Neil edged Duvall for second on lap 28 but ‘Big Daddy’ battled back to regain the runner-up spot one lap later. Meanwhile, Hughes was cruising while Dan Ebert jumped past both Duvall and O’Neil. Four laps later, Sorensen blasted by Hughes on the outside and set sail for the checkered flag. O’Neil held off Hughes for second with Ebert, who started 16th, finishing fourth.