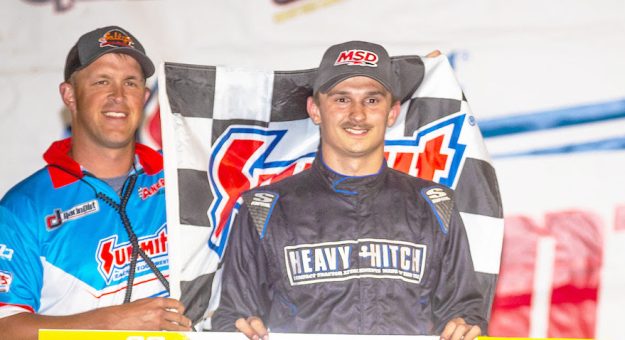 NEW RICHMOND, Wis. — Thursday’s opener at the 23rd annual Masters was the 16th event of the season for the Summit USMTS National Championship and points leader Dustin Sorensen rumbled to his fourth victory of the season at Cedar Lake Speedway. They remained that way until the race’s first caution on lap four. With the green flag back out, O’Neil narrowly held his spot as Jake Timm and Cayden Carter challenged him for the spot. Back to racing, a fun four-car fight between Brown, Ebert, Sorensen and rim-riding Jake Timm all in the hunt for the top spot. Following another caution with 10 laps to go, O’Neil found himself three-wide with Zack VanderBeek and Ebert as they exited the fourth turn racing back to the green flag.