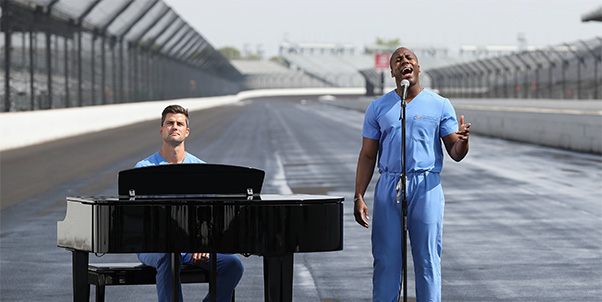 INDIANAPOLIS – The stirring sounds of the Singing Surgeons and Jim Cornelison highlight pre-race festivities for the 104th Indianapolis 500 presented by Gainbridge on Sunday, Aug. 23, performing live at Indianapolis Motor Speedway during the emotional and historic countdown to The Greatest Spectacle in Racing. “We’re honored and humbled to perform the national anthem at ‘The Greatest Spectacle in Racing,’” Francois and Robinson said. While we’re all sad fans won’t be at this year’s race, our performance will carry a message of hope and optimism as we pay tribute to the heroes fighting COVID-19 each and every day.”. He is the first “Back Home Again in Indiana” singer in consecutive years since the legendary Jim Nabors appeared for the 36th and final time in 2014. “Each year I am humbled by the response from the INDYCAR fans, and I know this year’s performance carries extra meaning under such extraordinary circumstances.