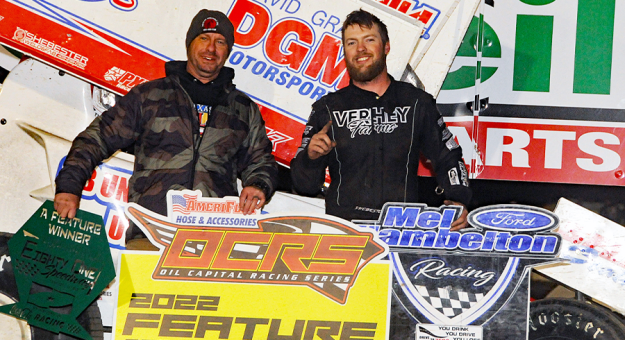 WICHITA, Kan. – Steven Shebester prevailed in Saturday night’s 25-lap Oil Capital Racing Series vs. United Rebel Sprint Series “Civil War” main event at 81 Speedway. After surrendering the point to Kyle Clark in traffic ten laps into the main event, Shebester battled back to the forefront and the led the closing rounds to secure the win aboard the Riverside Salvage/CB Underground Utilities/David Grace Motorsports No. Shebester set the tone early, bolting into the lead at the outset from the front row outside starting position before reaching traffic within eight rounds. Fourth-starter Clark seized the opportunity to close in on the leader and claimed the point for several rounds before Shebester countered to recapture the lead and paced the field the rest of the way in the non-stop affair.