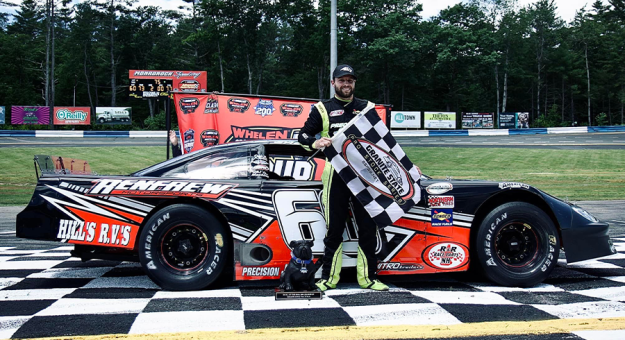 The multi-time Super Late Model champion picked up the win in Sunday’s rain-delayed Doghouse 75, the fourth race of the 2022 Granite State Pro Stock Series season. Shaw, who started fourth, climbed to second and began chipping away at Estrella’s advantage. As the race approached halfway, Shaw and the top-five cars quickly closed the gap to Estrella, with Shaw looking for a way around the race leader. On lap 42, Shaw found an opening at last, getting underneath the rookie and driving on past. While Doiron and Jimmy Renfrew, Jr. worked on Estrella, Shaw drove away, setting a blistering pace. Doiron eventually cleared Estrella, but Shaw was already several car lengths ahead, and with the race running clean and green, Doiron would have to chase Shaw down the hard way. Renfrew held on for fourth, completing a top-four sweep for cars out of the Dale Shaw Race Cars stable.