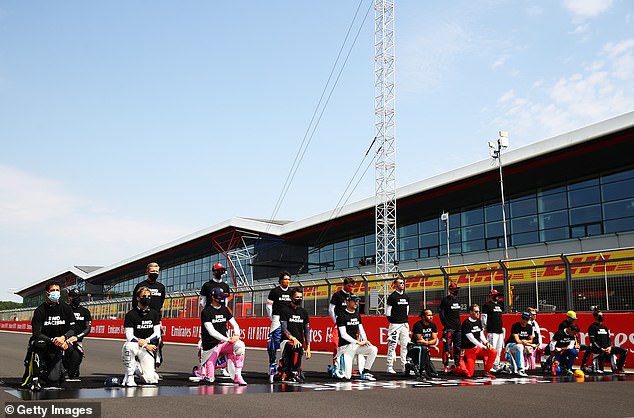 Formula One’s attempts to show solidarity against racism continue to create division with the grid today as seven drivers elected to stand rather than ‘taking the knee’ in the pre-race ceremony of the 70th Anniversary Grand Prix at Britain’s Silverstone race track — the same seven that stood last week. Seven drivers elected to stand rather than ‘take the knee’ at the 70th Anniversary Grand Prix. All drivers wore ‘End Racism’ t-shirts, while Lewis Hamilton (BR) wore a ‘Black Lives Matter’ one. Haas driver Magnussen, who has previously knelt in the Black Lives Matter protest before the race, joined the original six at Silverstone by electing to stand at the British GP last week. Lewis Hamilton (L) and Sebastian Vettel (R) have both previously called for F1 to do more in giving drivers a voice in the fight against racism after some uncomfortable showings.