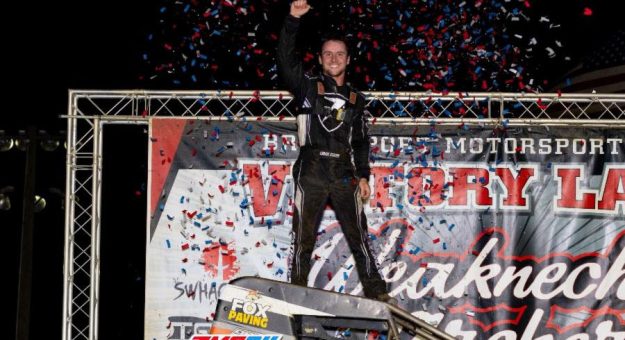 BRIDGEPORT, N.J. — In his five career USAC Eastern Storm feature starts coming into Wednesday night’s event at New Jersey’s Bridgeport Motorsports Park, Logan Seavey had yet to finish in the top half of the field. On the lap-six restart, Danner cracked the whip and slid past Seavey on the entry into turn one for the second position as the USAC East Coast Sprint Car point leader put himself in prime position to challenge Meseraull in his drive for a first career series win. Shortly thereafter, Seavey came to life as he slid by Leary for seccond in turn three on lap 25 and clamped down to within a car length of Danner. With three to go, Seavey got right to the back bumper of Danner on the front straightaway, then slid by in turn one on lap 28 to take over at the front, completing the lap just before Jake Swanson spun in turn four. Danner was out of line on the lap-29 restart attempt, which was called back.