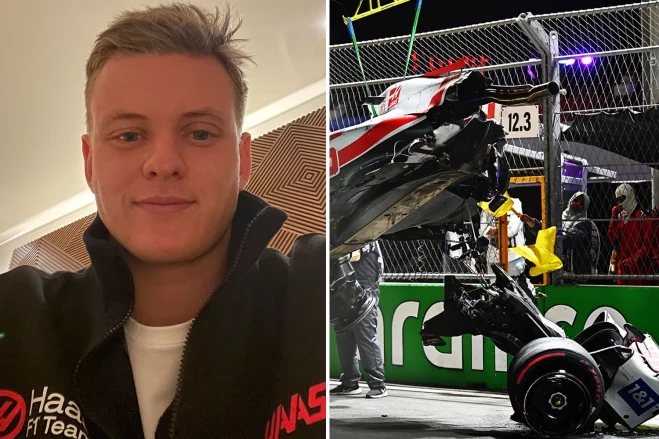 MICK SCHUMACHER has confirmed with fans that he is ‘OK’ after being involved in a horrifying 170mph crash during qualifying. The Haas driver, 23, will not be racing after the terrifying smash left his car split in two. Haas also confirmed that Schumacher would not be able to race in Sunday’s GP. Sergio Perez’s stunning first pole ever for today’s Saudi GP is just a sideshow in Jeddah amid more race controversy and Mick Schumacher’s 170mph crash. The Haas driver, 23, confirmed he was “OK” after being airlifted to hospital – but his car was split in two. Sergio Perez hailed his first F1 pole position in 215 attempts. After a 57 minute delay, Sergio Perez took his first pole position of his F1 career in 215 attempts. Charles Leclerc admitted he was ‘definitely not expecting that’ as he saw Sergio Perez storm to pole in the final minute. Sergio Perez claimed he could ‘do a thousand laps and not beat’ his peerless pole clincher for tomorrow’s Saudi GP. Red Bull’s Sergio Perez clocked 1:28.200 as his astonishing final lap beat the flying Ferraris of Charles Leclerc and Carlos Sainz to land his FIRST EVER POLE. Sergio Perez was ecstatic to grab his first ever pole – as he exclaimed on the radio… Perez on pole. Charles Leclerc pips Carlos Sainz – but Sergio Perez seems to have nicked pole!.