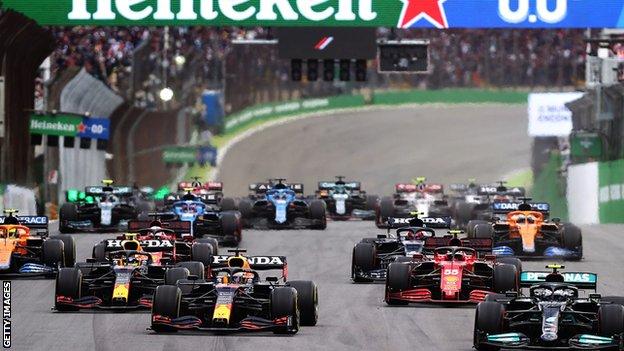 Mercedes driver Valtteri Bottas beat Red Bull’s Max Verstappen in sprint qualifying and will start the Sao Paulo Grand Prix from pole position. Verstappen’s title rival Lewis Hamilton, who started at the back after a technical infringement was found on his car, recovered superbly to fifth. Hamilton has a five-place grid penalty for the grand prix for using too many engine parts and will start 10th. Verstappen’s second place extended his points lead to 21 over Hamilton. Verstappen came back at him later in the race as Bottas’ less-durable tyres began to fade, but after closing to within 0.4 seconds of the Finn fell back a little and had to settle for second. Verstappen was penalised himself for touching the rear wing of Hamilton’s car, seemingly to assess the situation for himself, which landed him a £42,300 fine. It meant a start from last place on the grid for Hamilton, but he set about his task with a vengeance.