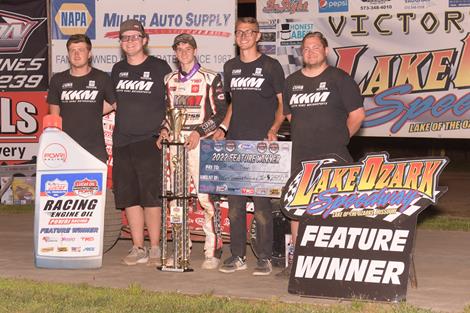 (5/28/22) Ryan Timms would rip the lip at Lake Ozark Speedway’s Spring Sprint and Midget Nationals to earn his second career Lucas Oil POWRi National Midget League feature victory in an action-packed twenty-five-lap thriller. Launching the field on the initial green flag launch would find Timms and McIntosh battling feverishly into the first pair of corners with Ryan Timms riding the low line momentum to the front of the field to lead the initial lap with Cannon following closely behind. Swapping the lead nearly every corner on every lap, Timms and McIntosh would put on a dazzling display of driving at the front of the field with Joe B Miller, Bryant Weideman, and Taylor Reimer all racing inside the top-five. Going back green would witness Timms run the point as Taylor Reimer and Joe B Miller attempted to cut into the lead as Jacob Denney and Bryant Weideman battled behind the leading pack.