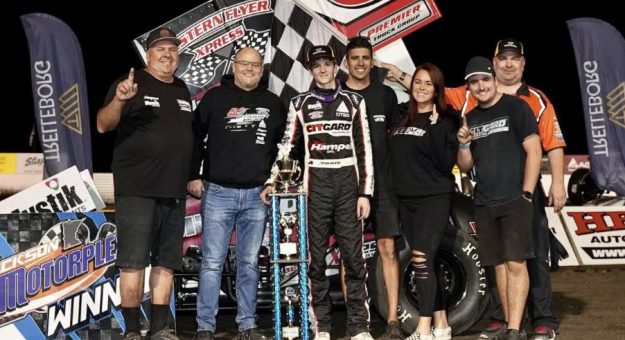 JACKSON, Minn. — Ryan Timms and Trevor Serbus each posted a victory on Friday evening at Jackson Motorplex, which hosted the opening night of The Border Battle presented by Trelleborg. Timms was within striking distance of polesitter Kaleb Johnson as traffic appeared with four laps remaining. “We were kinda struggling in (turns) one and two,” Timms said. I knew we wouldn’t get him unless we got to lapped traffic. I just prayed to not have a caution and we caught him in lapped traffic.”. Timms executed a slide job on Johnson, who was in search of his first 410 winged sprint car win, in turns one and two on lap 24. Just with lapped traffic there I knew I was going to get in trouble. “Typically, I’m not the best in lapped traffic, but it was working to my advantage,” he said.