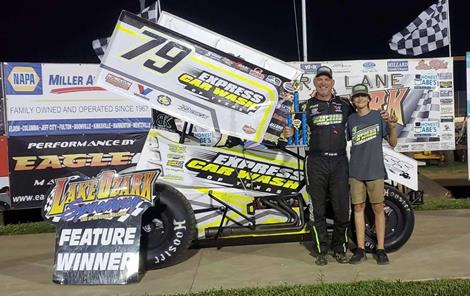 (6/12/22) Texas wheelman Ryan Hall would make the long haul worth the trip in the POWRi LOS Wray’s Lawn and Landscaping 305 Sprint Division Saturday night in support of the Lake Ozark Speedway 410 Nationals: Wing & Non-Wing, gaining his first divisional feature victory in his first appearance in the Honest Abe’s Home Service LOS Chase for the Championship at “The Lake”. Stretching out a commanding lead, Hall would be in a class by himself to capture his first feature victory at Lake Ozark Speedway with defending champion Randy Martin finishing runner-up. Jack Potter would earn the advantage over Kenny Potter in the late stages of the feature to nab third, leaving Kenny to place fourth as Greg Murry rounded out the top-five finishers for the POWRi LOS Wray’s Lawn and Landscaping 305 Sprint Division feature event. POWRi Lake Ozark Speedway 305 Sprints | 6/11/22:
A Feature 1 (15 Laps): 1. Next up for the POWRi LOS Wray’s Lawn and Landscaping 305 Sprints at Lake Ozark Speedway will be Saturday, June 18th for the POWRi Pure Stock Special.