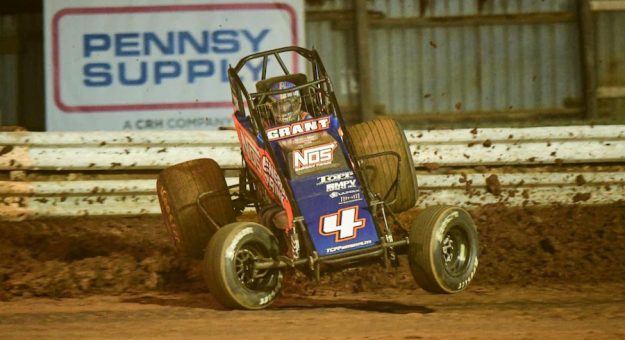 MECHANICSBURG, Pa. — Despite leading all 30 laps of Friday night’s Eastern Storm USAC AMSOIL National Sprint Car Series race at Williams Grove Speedway, Justin Grant endured a wild ride en route to victory lane. “Sprint car racing is supposed to be gnarly,” Grant said “They’re supposed to be won on the fence. Grant dug his way out of it and carried on through turn four and the front straightway, taking the signal for one lap to go from the flag stand. Grant was steady as he goes with a lead of one second over Seavey with Bright another full second behind Seavey. Slightly behind Grant, Seavey answered the message and roared back past Bright for second coming to the line with three laps to go. But, at that moment, Grant had increased his lead to a 1.8 second margin and, seemingly, all was in hand.