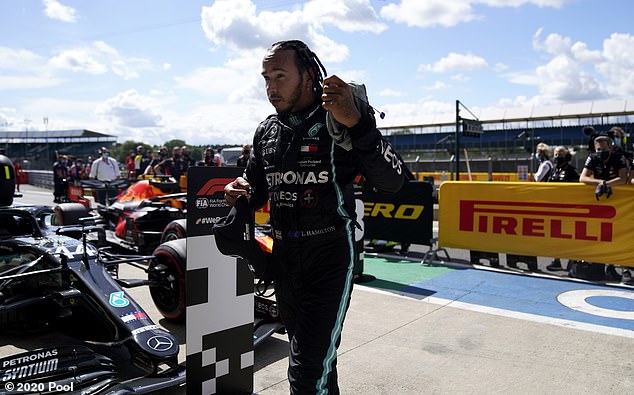 ‘Qualifying is about confidence… it was a real struggle out there’: Lewis Hamilton delighted with his recovery after taking pole at the British Grand Prix despite spinning early on at Silverstone

Lewis Hamilton couldn’t hide his delight after taking pole at the British Grand Prix at Silverstone on Saturday. The Mercedes driver was made to work for his victory though, as he spun in Q2 after struggling for rhythm with Valtteri Bottas at the front of the pack. Though Hamilton recovered to register the 91st pole of his career, with Bottas behind him in second and Red Bull’s Max Verstappen in third. Mercedes’ Lewis Hamilton was delighted to take pole in the British Grand Prix qualifying race. Speaking after the qualifying race, Hamilton said: ‘It was real struggle out there. The Mercedes driver found the Silverston race difficult as he was spun early on in Q2. But Hamilton (left) recovered to take the 91st pole of his career ahead of Valtteri Bottas.