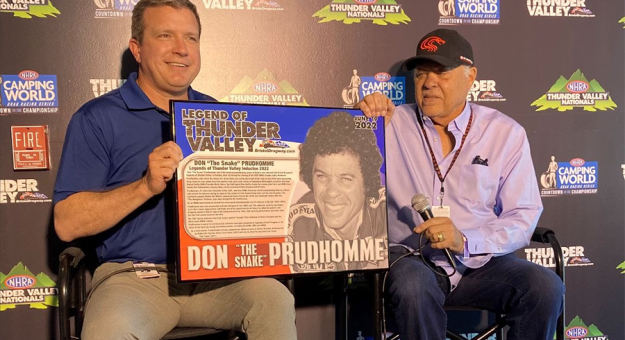 Prudhomme Inducted Into Bristol’s Legends Of The Dragway

BRISTOL, Tenn. – Don “The Snake” Prudhomme, one of the most successful drag racers in history, was inducted into the prestigious Legends of Thunder Valley by Bristol Motor Speedway & Dragway President Jerry Caldwell.Prudhomme, who drove the famed U.S. Army Funny Car during the height of his reign as one of the most dominating drag racers to ever speed down the quarter-mile, joins such names as Speedway Motorsports executive chairman Bruton Smith, NHRA Founder Wally Parks, Top Fuel legend Don Garlits, Funny Car champ John Force and NHRA team owner Don Schumacher, among others, in the exclusive Hall of Fame at historic Bristol Dragway.“Don accomplished so much at Bristol Dragway over the years and has been such an icon in the world of drag racing and we are so honored to have him here at Thunder Valley as our special guest this weekend,” said Caldwell. “This is such an honor, I have always loved Bristol Dragway and I came here to race for the first time as a kid basically,” Prudhomme said.