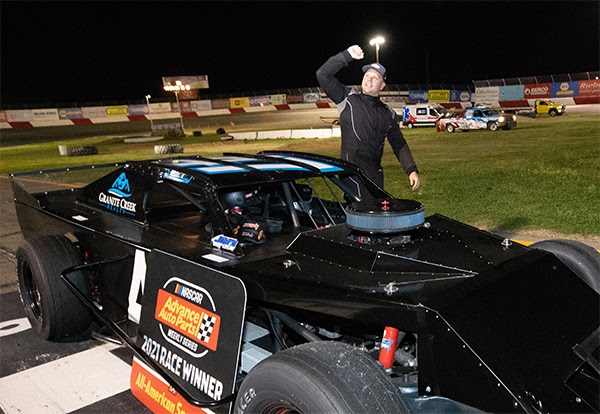 ROSEVILLE, Calif. – An enthusiastic crowd of race fans returned to All American Speedway on Saturday for seven main events of NASCAR Advance Auto Parts Weekly Series action, including Eric Price and Josh Blackwood splitting the Jaws Gear & Axle modified features. Price’s win was his second consecutive in the division after winning the season opener as well at the one-third mile asphalt oval. Price’s win lined him up eighth for the second 30-lap main after the inversion. Loomis’ Blackwood quickly entered the picture, knifing under Mullican in turn three to lead lap five. Philpot and Price ran side-by-side for several laps for third before Price grabbed the position. Price then narrowly topped Ralph Bailey of Colfax at the finish for second place, behind Blackwood’s victory. Price took advantage of the skirmish to take the lead on the restart, leading Bailey, Philpot, Andersen, and Blackwood as the top-five finishers. Roseville’s Josh Whitfield navigated his way to the front throughout the 30-lap Super Stock feature. Roseville’s Andrew Kemp led the first 12 laps of the race before Roseville’s Roy Smith grabbed the lead exiting turn four to lead lap 13.