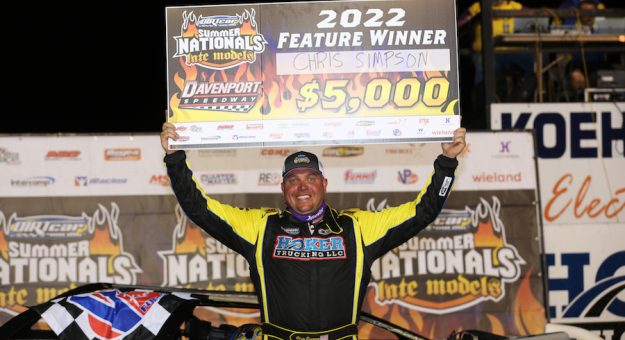 DAVENPORT, Iowa — Chris Simpson crossed underneath the start/finish line with six laps remaining, over two seconds behind leader Bobby Pierce. “I was just hoping he pulled into the pits and didn’t cause a caution,” Simpson said. “We probably had a second-place car, but I’ll take a first any day,” Simpson said. Pierce was credited with a 17th-place finish, effectively knocking him out of the Hell Tour points lead and back into third, 21 points behind. Starting third on the grid, Simpson led the first 15 circuits of the race before Pierce got by him on the top. “I felt like I was running Bobby down, and then they moved him down in turns three and four,” Simpson said. “It feels good just to be in any victory lane,” Simpson said.