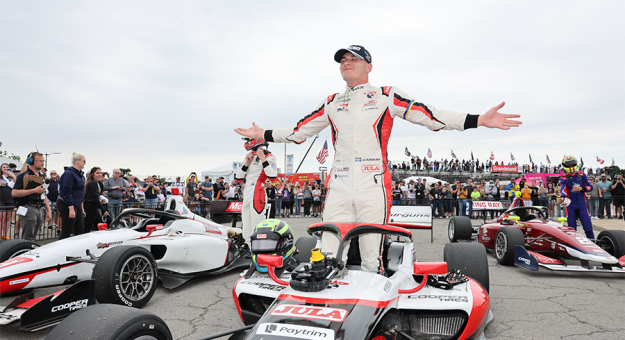 DETROIT – Linus Lundqvist took a second dip in the iconic James Scott Memorial Fountain to celebrate a sweep Sunday of the Indy Lights Detroit Grand Prix doubleheader. Lundqvist led all 30 laps of the Indy Lights Presented by Cooper Tires event at the Raceway at Belle Isle Park from the pole in the No. He won both Indy Lights races this weekend in Detroit and has won three consecutive races this season. Besides winning twice from the pole and leading every lap, he also turned the fastest lap in both races. “What a couple of races we’ve done,” Lundqvist said. Lundqvist led second-place finisher Hunter McElrea to the finish line by 3.7005 seconds. Light moisture arrived on Lap 16, potentially throwing a curveball in the race. Lundqvist has won all but two races this season and is boasting an average finish of second after six races. His worst finish is fifth, in Race 1 of the IMS road course doubleheader.