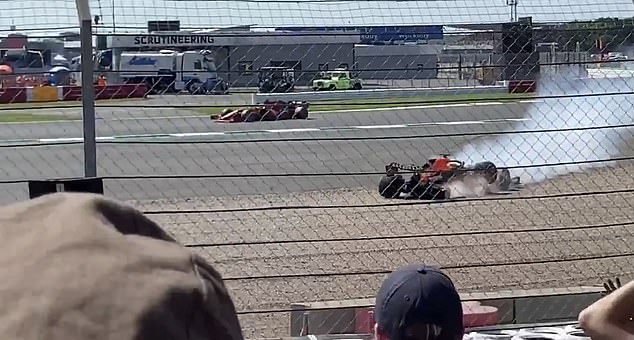 Fan footage from the British Grand Prix has given a new angle to the severe crash between Max Verstappen and Lewis Hamilton. Verstappen, who went into Sunday’s race at Silverstone 33 points ahead in the title race, was clipped by Hamilton on Copse corner and sent crashing into the tyre wall at 180mph. That put the Dutchman out of the race while seven-time world champion Hamilton controversially went on to win. ‘That isn’t the way I ever want to win a race or to race but these things happen,’ he said. Seven-time world champion Hamilton, 36, was involved in a crash that saw championship leader and rival Max Verstappen plough his Red Bull into a wall and out of the race at Silverstone.