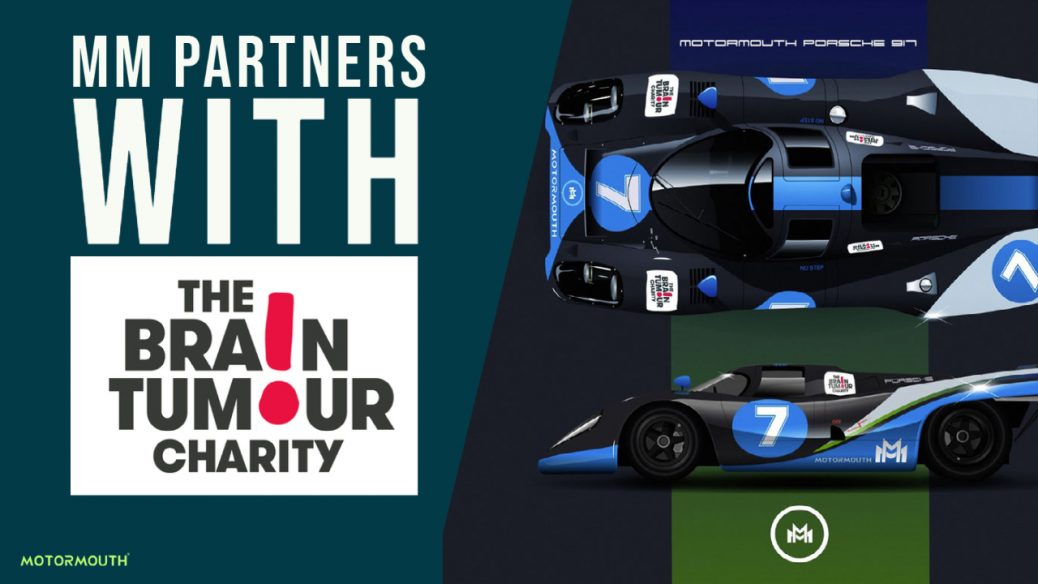 Driven by a personal connection to The Brain Tumour Charity, the partnership will showcase the world of motorsport to a huge UK and international audience

Launched in 2019, Motormouth is a digital motorsport community with an app, website and podcast dedicated to the latest news, views, video and interviews with the biggest names in global motorsport.

The partnership with The Brain Tumour Charity is inspired by Motormouth’s Harry Benjamin, whose mum Ginny, was diagnosed with a glioblastoma brain tumour.

Ginny was diagnosed in 2017 after experiencing severe headaches which Harry’s dad, Jon, being a practicing Neurosurgeon, suspected might be something more than just a bad headache. Surgery followed with chemotherapy for the majority of the year before more surgery, chemotherapy and radiotherapy. However, she eventually passed away at home in November 2018.

Harry was 21 when his mum passed away, having studied acting at the prestigious Royal Academy of Dramatic Art in London and juggling working as a broadcaster alongside studying for a University degree. At the time of his mum’s diagnosis, Harry was studying but also working for huge broadcasters including Absolute Radio, Hits Radio, BBC Sport and more as a presenter and producer. One of his passions is of course motorsport which alongside working, helped him and still does help him get through his grief.

“I’m a workaholic which is probably not the best way of dealing with things, but working as a broadcaster, particularly as an emerging broadcaster, within motorsport, is something I’ve wanted for a very long time and even during chemotherapy and radiotherapy, my mum was incredibly supportive and made sure I kept going, when all I wanted to do was stop.

“I’ve found motorsport a massive escape from the real world at times, whether that’s simply enjoying watching a race, or going out and making content, which through MotorMouth we’ve been incredibly successful with.

“Interviewing and working with some of the biggest racing names in the world is a huge honour and makes me proud that I am not only carrying on with pursuing my career goals but that in doing so, my out and out love for motorsport is helping me get through what has been the hardest moments of my life and what still does help me through today.”

The Motormouth concept is the brainchild of founder, CEO and podcast host Tim Silvey, who over the last 15 years has been heavily embedded in the commercial and marketing landscape of Formula 1 through his other businesses and consultancy with brands and agencies. He spent many years managing the careers of high-profile racing drivers across F1, BTCC, Le Mans and bringing young racers through the junior categories, before setting up MotorMouth.

Together, he and Harry have ambitious plans for the business including some major developments to their app plus podcast releases with the likes of Formula One and IndyCar star Mario Andretti, Formula One legend Gerhard Berger, former BBC F1 broadcaster Jake Humphrey and Haas F1 Team boss and star of Netflix show ‘Drive to Survive’, Guenther Steiner, with further big names being announced soon as they continue the growth of the platform which already has an audience in over 35 countries around the world.

Tim said: “It’s an honour to see MotorMouth partner with The Brain Tumour Charity and an important step in our purpose-led approach. The cause is close to our hearts with our podcast host, Harry, being personally affected with his mother’s illness and sad passing.

“We were seeking partners that resonated with us and that story was more than enough to bring the parties together and unite. Through the partnership, we will be activating several programmes over the next few months to raise awareness and funds for the charity including special podcast episodes focussing on Harry’s story, but also others in motorsport who have been affected by brain disease.”

Annie Edwards, Corporate Development Manager at The Brain Tumour Charity, said: “We are especially proud and grateful to have MotorMouth’s support to help fund our world-class research and carry on all our work to accelerate a cure for this devastating disease.

“We are unashamedly ambitious in our goals to double the survival and halve the harm that brain tumours have on quality of life, and the partnership with MotorMouth will be invaluable in helping us to achieve these by reaching a wider audience and raising vital awareness.”

The Brain Tumour Charity is the UK’s largest dedicated brain tumour charity, committed to fighting brain tumours on all fronts.

The organisation funds pioneering research to increase survival and improve treatment options, as well as raising awareness of the symptoms and effects of brain tumours to bring about earlier diagnosis.

The Charity also provides support for everyone affected so that they can live as full a life as possible, with the best quality of life.