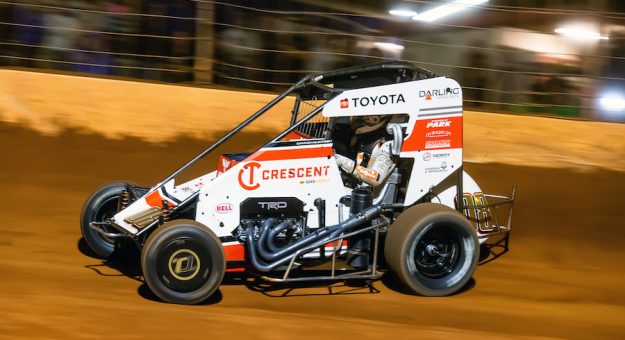 SALISBURY, N.C. — The box score shows a nearly perfect night for Cannon McIntosh as he won Wednesday night’s Xtreme Outlaw Midget Series presented by Toyota  at Millbridge Speedway, but the 19-year-old pilot had to fend off some ferocious phenoms behind him to capture the second event in series history. The likes of Larson, Boschele, Crews, Reimer and Wiedeman all had their names in the hat, but none could stop the Dave Mac/Dalby Motorsports Spike/Toyota No. With five-to-go, things heated up as McIntosh & Boschele, who won Tuesday’s debut in the Keith Kunz/Curb-Agajanian Motorsports, Curb Records, Bullet/Toyota No. It then became 1-v-1 as Boschele lined up McIntosh and tossed a slider his way to officially lead the 36th circuit. From there, McIntosh handled a pair of restarts and four more laps for the victory. “I didn’t know how close they were behind me, but I knew there was nowhere I could go,” McIntosh said. I know it’s gonna come soon, I will win a Midget race soon.