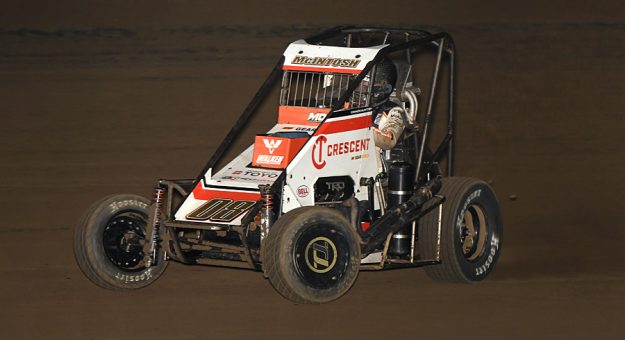 The only thing the weather did was slightly delay McIntosh’s ultimate beeline from start to finish as he surged through the field, gliding underneath leader Grant in turn one on lap nine to take over at the front. “I was able to get by one or two guys there in the first corner and then just followed in suit while watching what the guys in front of me were doing,” McIntosh disclosed. One lap after McIntosh took over the lead, 22nd running Kaidon Brown flipped upside in turn four. Coming to 11 laps to go, Denney had cleared McDougal for third and began to work on Grant for second. Justin Grant won the Kokomo Sprint Car feature that immediately preceded the start of the midget feature.