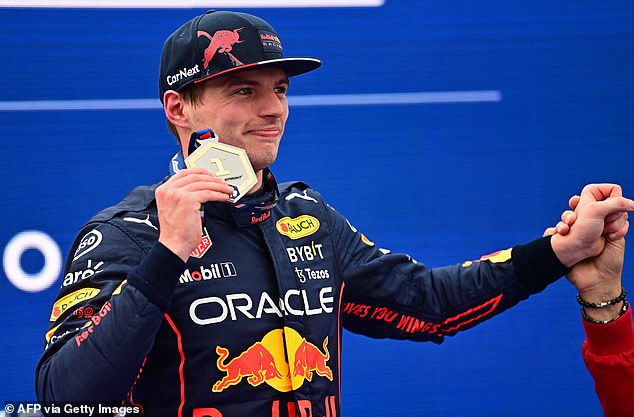 Red Bull’s Max Verstappen won the sprint race in Imola with a dramatic penultimate-lap pass – while Lewis Hamilton suffered another ignominious day by finishing a lowly 14th. Verstappen gets eight points for that victory while Leclerc gets seven and Perez six. Leclerc doesn’t have DRS and is struggling to close that gap back up. Leclerc is certainly going to come back if he can stay in touch. Verstappen tries to make a move on Leclerc but just can’t close the gap to make the overtake. Verstappen has asked his engineer to ‘leave me to it’. Verstappen is fighting the car in the corners and is now closing the gap to Leclerc. Verstappen is starting to close in on Leclerc with the Ferrari man starting to show graining on his tyres – could we be set up for an exciting finish with five laps to go?. Leclerc is now just over a second out in front ahead of Verstappen while Sainz has gone up two places. Your 21-lap Sprint race is starting shortly so stay tuned… Max Verstappen told Sky Sports: ‘I expect it to be close again. However, Max Verstappen, who has not finished two of the opening three races due to reliability issues, will be looking to close the gap to Leclerc and is the most likely to do so at Imola, as he take pole for the Sprint. Verstappen currently has 25 points from his one race win.