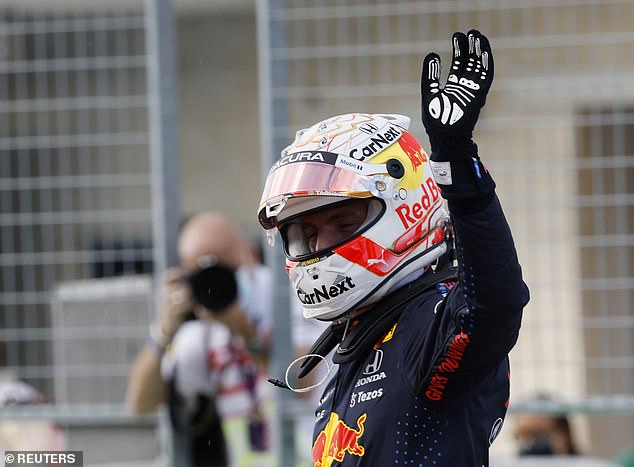 Lewis Hamilton will go head-head-to-head with Max Verstappen into one of the widest corners in the world after missing out on pole for the US Grand Prix. Verstappen finished up two-tenths of a second clear of the Briton, a past master at the Circuit of Americas on which he has triumphed five times since the event moved to Texas in 2012. Verstappen was naturally delighted with pole, his mood transformed from the moment on Friday that indicated the pressure of the title fight might have been getting to him. Verstappen was unimpressed and called the Mercedes man a ‘stupid idiot’ before flipping the middle digit of his right hand in protest. Of the practice incident, Hamilton said: ‘I didn’t run him wide. Starting third is Verstappen’s Red Bull team-mate Sergio Perez, who is popular here with the Mexican fans who have travelled to Austin. Verstappen is a brilliant driver, probably now the fastest man out there. Verstappen goes fastest – and is then usurped by Perez! The bottom five are: Ocon, Vettel, Giovinazzi, Alonso and Russell. Verstappen is a third of a second ahead of second-placed Hamilton and is in the pits. The bottom five is, from 11-15: Perez, Ricciardo, Russell, Vettel, Giovinazzi. Verstappen went almost half a second quicker than Bottas. Verstappen his 1:33.464, right after Hamilton had overtaken Bottas. Verstappen goes fastest, 0.505secs quicker than Ricciardo. Charles Leclerc is now fastest, only to be overtaken by Max Verstappen and Sergio Perez, who sit first and second respectively. Both Verstappen and Hamilton were outshone by Sergio Perez, who was fastest in second and third practice.