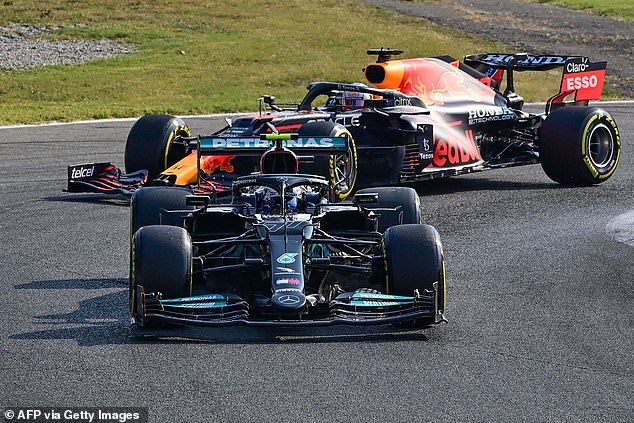 Lewis Hamilton lost further ground to championship rival Max Verstappen after he finished only fifth in Saturday’s sprint race at the Italian Grand Prix. The Mercedes dropped to sixth before Gasly ran over his own front wing – damaged after bumping Ricciardo’s McLaren – and slammed into the wall at the Curva Grande. Hamilton is also on the dirty side of the track so will have to watch out for the two Ferraris who will start on Row 3. What a result for Daniel Ricciardo who will start on the front row alongside Verstappen with Norris and Hamilton on the second row. Hamilton has a little look at Norris into the first turn but is not close enough. Hamilton has a drift of his own on the second Lesmo but is still putting pressure on Norris. Hamilton will be very frustrated behind the McLaren of Norris he can’t get close enough. Hamilton has DRS on Norris but again is not close enough. Hamilton is six tenths behind Norris but the third place McLaren of Ricciardo is six seconds off Verstappen in second. Hamilton couldn’t get close enough to make a move into the first turn. Hamilton is five tenths behind Norris and has DRS on his fellow Brit. Hamilton is stuck behind the McLarens but putting pressure on Norris for fourth. Bottas makes a good restart and leads from Verstappen, Ricciardo, Norris, Hamilton, LeClerc, Sainz, Giovinazzi, Stroll and Perez. Hamilton has dropped behind the two McLarens and the Red Bull of Verstappen. The Mercedes engines have traditionally been very handy at Monza and Verstappen could have a tricky race if he drops behind a McLaren at the start.