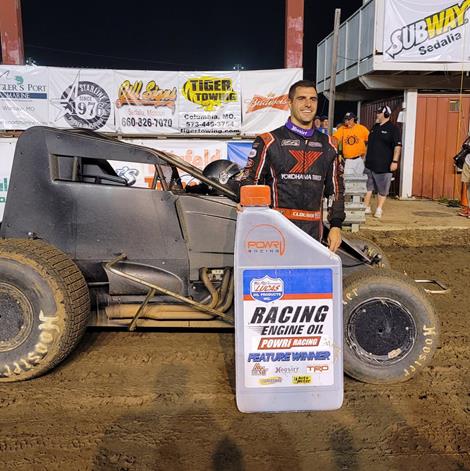 (07/29/2021) Entering into the historic half-mile of the Missouri State Fairgrounds, the Lucas Oil POWRi Wingless Auto Racing Sprint League would amp up the open-wheel racing excitement for the first time in series competition since 2016. Running a mid-to-high line route to perfection, Mario Clouser would emerge victoriously and earn his fifth feature victory this season in POWRi WAR racing. With Kreisel starting inside and Xavier Doney outside row one, the green flags would wave for feature action. Late-race tire problems would plague Kreisel in the final corner as Xavier Doney finished runner up and Dakota Earls rounded out the podium finishers at the Missouri State Fair Speedway for the POWRi WAR Sprint League. Lucas Oil POWRi WAR Feature Results at Missouri St. Fair Speedway on July 29th, 2021:
1.