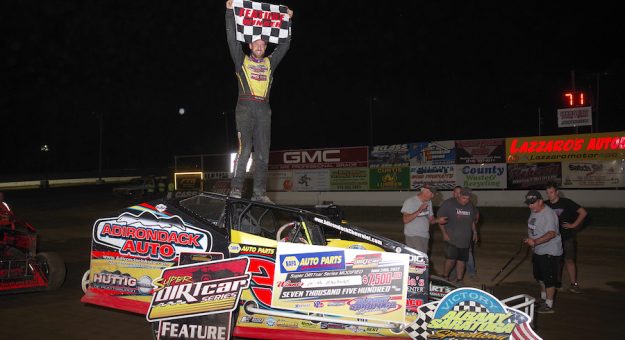 Mahaney Wins One For The Locals

MALTA, N.Y. — The invaders came but the local forces prevailed Friday night at the Albany-Saratoga Speedway, with Mike Mahaney leading all but a handful of laps in the 71-lap Super DIRTcar Series event, topping a podium that included another former track champion, Marc Johnson, and rim riding Jessey Mueller. “I hit the inside wall in the first ten laps but it took until the 20’s for it to go completely flat,” tipped the elated Mahaney. “I wanted to get the lead on the first lap but Marc had the same idea,” said Mahaney. “He slid me, I slid him, then the yellow flew again and he got the lead back so I decided to work the bottom until I got by him. By then, Mahaney was out to a full straightaway lead again and the finish was set.