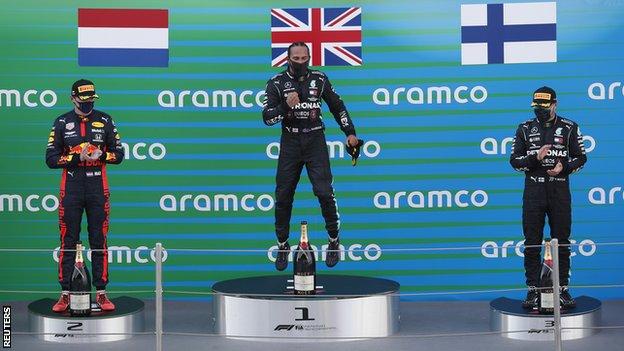 Lewis Hamilton dominated the Spanish Grand Prix to take his fourth victory in six races so far this year. Hamilton’s team-mate Valtteri Bottas took third, failing to catch Verstappen despite Mercedes’ efforts on strategy. Hamilton’s win extended his World Championship lead to 37 points over Verstappen, who is six ahead of Bottas. In temperatures of 30C, the race was gruelling physically for all the drivers, but there was no sign of the expected challenge to Hamilton from Verstappen. With Hamilton in control, Red Bull’s focus now became ensuring Verstappen held on to second place from Bottas, who made a poor start and dropped to fourth on the first lap, behind Verstappen and Racing Point’s Lance Stroll. Hamilton lapped everyone up to fourth place, so far ahead were the front three from the rest. Lewis Hamilton: “I was in a daze out there,” he says.