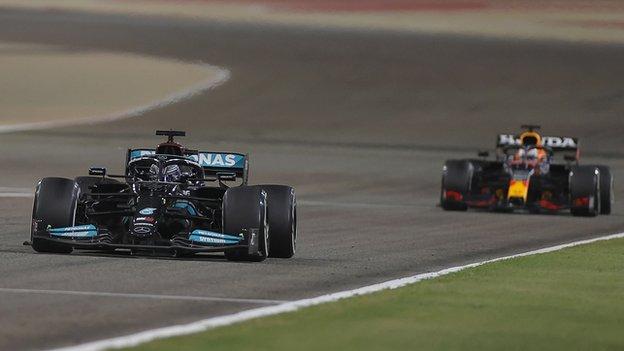 Mercedes driver Lewis Hamilton held off Max Verstappen’s Red Bull for victory in an extraordinary finish to the Bahrain Grand Prix. Verstappen actually took the lead from Hamilton with four laps to go but handed the position back because he had overtaken by running off the track. The move – an order from race control – cost the Red Bull driver the victory. Verstappen never quite got close enough again to challenge Hamilton. Verstappen complained over the radio about being ordered by his team to hand the lead back, but was told they had no choice. Verstappen converted his pole into a lead at the start, but Hamilton moved in front when Mercedes stopped him earlier to go for the so-called undercut, when a driver pits to gain from the speed benefit of fresher tyres. That gave Hamilton track position, and he kept it through his second pit stop. Red Bull decided to run Verstappen 11 laps longer to give him a tyre advantage at the end of the race, and he stopped with 18 laps to go, setting up a grandstand finish. Verstappen was on Hamilton’s tail with five laps to go, and passed him a lap later around the outside at Turn Four.