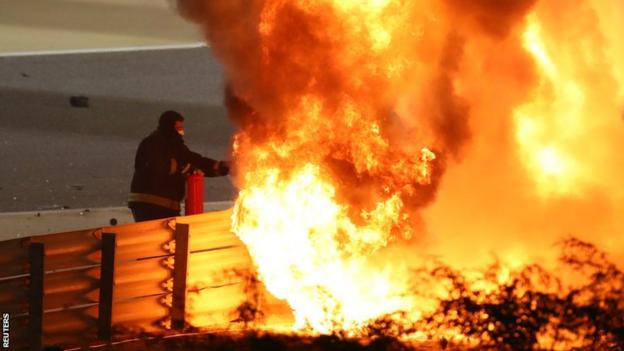 Grosjean was taken to hospital with burns to the back of both hands after his car pierced the barriers on the first lap. Grosjean was in the inferno for several seconds before he managed to extricate himself and was helped over the barrier by FIA doctor Ian Stewart, who was in the medical car that rushed to the scene. That brought out the safety car and it was only on the ninth lap that the race finally got properly under way. Racing Point’s Sergio Perez was on course for a fine third place and his second podium in two races until an apparent engine failure with three laps to go promoted Red Bull’s Alex Albon. Perez’s retirement promoted Charles Leclerc to the final point in 10th place after a dismal race for Ferrari, for whom Vettel could manage only 13th. He had a good race, but the guys did an amazing job to get the car ready.