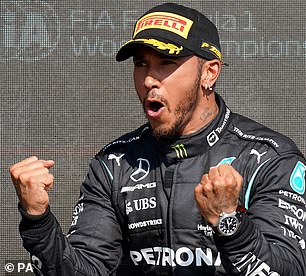 Lewis Hamilton WAS to blame for 180mph crash with Max Verstappen at Silverstone, insists former F1 supremo Bernie Ecclestone… who says ‘the punishment did not fit the crime’ – but now thinks Brit will WIN the world title after regaining ‘edge’

Bernie Ecclestone believes Lewis Hamilton was to blame for the 180mph crash that sent Max Verstappen off to hospital during Sunday’s British Grand Prix. Ecclestone’s views were echoed by Verstappen’s father Jos – a veteran of 107 F1 races — who said that Hamilton should have been disqualified. Verstappen Snr, 49, said: ‘It is really unacceptable what Hamilton did. Verstappen’s Red Bull team are considering a protest against Hamilton’s 10-second penalty ahead of the next race in Hungary. Red Bull team principal Christian Horner said: ‘There are rights that are available to us. F1 godfather Ecclestone, 90, said before the race that Hamilton has lost his ‘fight’. He said: ‘Lewis has got his act together and I now think he will win the title. It has given him a lift and it’s back to the old Lewis.