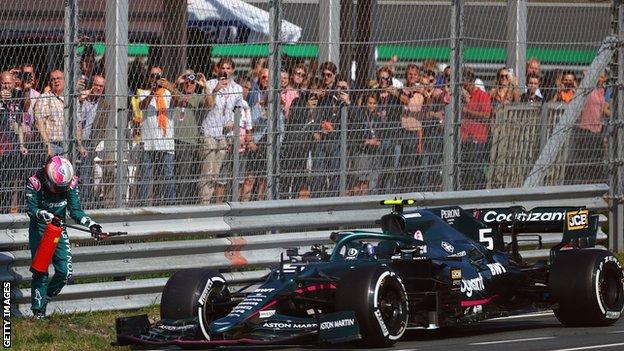 The hour-long session was interrupted for nearly 40 minutes when Sebastian Vettel’s Aston Martin stopped on track with a suspected engine failure. The car was still electrically live, delaying its recovery to the pits. Running resumed with only six minutes remaining and Hamilton edged Verstappen by 0.097 seconds. Vettel grabbed a fire extinguisher from the marshals and put out the small fire in the engine bay himself, presumably because he could see the car was still electrically live and could not be touched. But once the fire was out, it was many minutes before a marshal arrived on the scene dressed in insulating clothing and with rubber sheets to cover the car. The session resumed with only six minutes remaining, leading to a hectic period on the tight, twisty track.