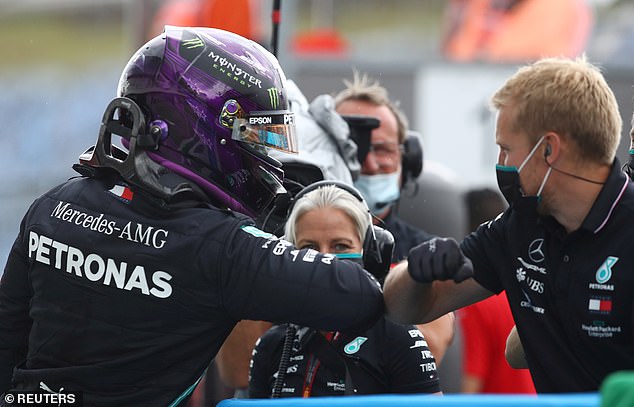 Lewis Hamilton took the 90th pole position of his career – his second in successive weekends – to set himself up for yet another victory at the Hungarian Grand Prix. With Mercedes dominant, Hamilton’s team-mate Valtteri Bottas was second quickest – 0.107sec back. Lance Stroll said after the session: ‘I’m very happy at the moment, the car was really strong throughout the weekend we’ve had the pace and all about piecing it together during that qualifying session. A fantastic lap from Lewis Hamilton and that’s his 90th career pole position. Lance Stroll is the first across the line before Lewis Hamilton sets his best time of the weekend with a 1:13.3. Lando Norris makes a jump to third in the mean-time. That pace from Lewis Hamilton and the Mercedes looks very worrying for the competition. Great laps from the Racing Point pair to finish ahead of Lewis Hamilton. Lando Norris goes fourth before his team-mate Carlos Sainz jumps him to go third. Looks like a battle between Lewis Hamilton and Valtteri Bottas once again for pole position.