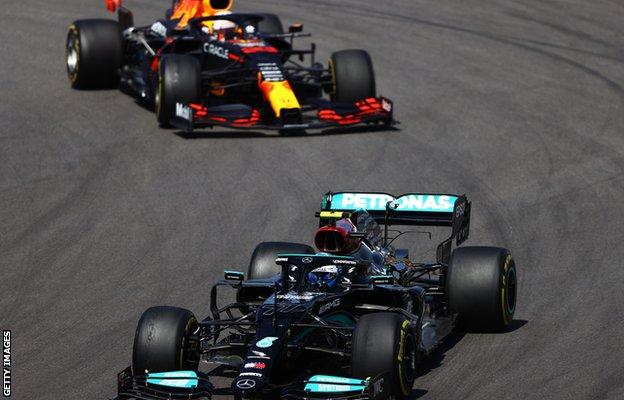 Lewis Hamilton: Out of an early mistake comes another masterclass

Bottas, Hamilton and Verstappen were running in their grid order when the safety car came out after two laps in Portugal. “I was in Valtteri’s tow,” Hamilton said, before turning to Verstappen and addressing him: “You were about to pull out [to try to pass], and I pulled out and gave you Valtteri’s tow. Verstappen swept around Hamilton’s outside into Turn One. Verstappen protected the inside, but Hamilton went there anyway, kicking up the dust off line, and they went around Turn One side-by-side again, this time the Mercedes coming out in front. Verstappen was perhaps handicapped by a slight straight-line deficit, and his passes came as a result of Hamilton’s re-start mis-step and then a slide from Bottas on his first lap after his pit stop. Verstappen won in Imola two weeks ago, but he should also have been on pole, and lost it by an error on his final qualifying lap. Verstappen set the fastest lap in qualifying – but lost pole again, this time because he had gone beyond track limits at Turn Four, so the time was deleted. Verstappen had that wiggle out of Turn 14 in the race that allowed Hamilton to get the run on him and re-pass. If things carry on like this, Hamilton will be champion again, because so far, over three races, close as it has been, Red Bull and Verstappen have not quite been at his level.